We build a new era of cooperation between the EU and Japan.

© Damienne de Harlez
Who we are

Message from the President 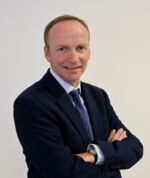 The world is still facing many difficulties as a result of the COVID pandemic.

But hopefully we can now look forward to much brighter times ahead with the progress of the vaccine across many countries in Europe.

My first year as president has been very busy with many policy proposals having been announced by the Commission.

It’s been an eventful year for JBCE with the two major policies of Green and Digital led by the Commission.

At the Business Roundtable meeting last November, I made a speech on behalf of JBCE, on EU-Japan regulatory cooperation and to discuss several important issues with EU-Japan business leaders, with the participation of Commissioner Breton and Mr Kajiyama.

My second year as President will be an equally exciting year for JBCE.

It’s also been a year of historic upheaval in trade and including the impact and response to Brexit.

On the occasion of the third year of the EU,Japan EPA on behalf of JBCE,

I participated in the EU-Japan Forum, where we exchanged views with the high level public and private sector representatives on the challenging global situation.

It has never been more important to strengthen the partnership between the EU and Japan.

JBCE continues to play an ever-important role in these very significant times at the EU.

On the occasion of the EU-Japan Summit on the 27th of May, JBCE was firmly recognized by both EU and Japanese leaders as an important player in the EU-Japan Cooperation.

I would like to congratulate all the members of JBCE over the years since its creation in 1999.

JBCE is an organisation that continues to grow.

I very much look forward to your continued support in the year ahead.

We have an important contribution to make in assisting the policymakers both in Europe and Japan,

Thank you very much indeed for listening.